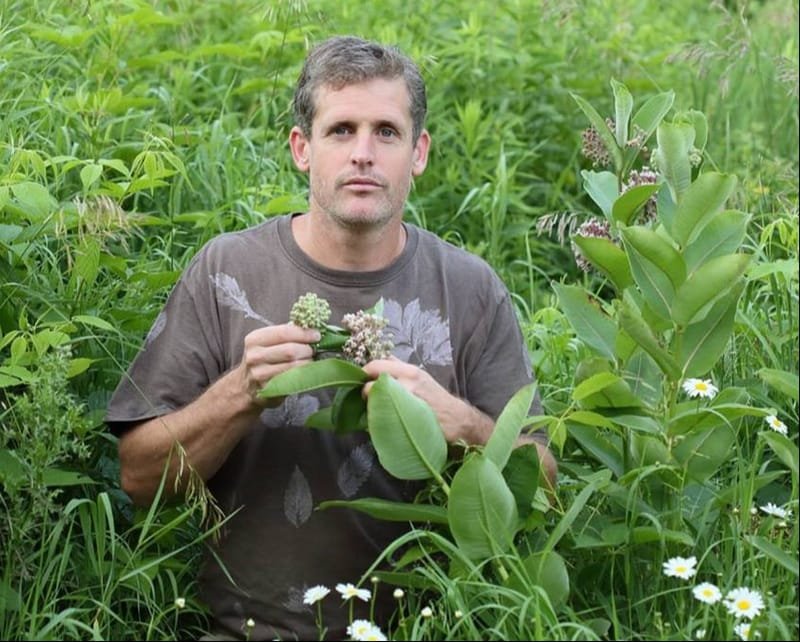 Sam was born in Wausau, Wisconsin, where he first learned to gather wild food in vacant lots, backyards, city parks, and at the edge of town. Later, his family moved to rural southern Wisconsin, and then to Madison. His first presentation on edible wild plants was to his seventh grade science class, demonstrating the foods that he collected regularly on his three-mile walk to school. He began “survival camping” at fourteen and led his first wild food walks when he was 19. After graduating from high school, he moved near the south shore of Lake Superior and built a rustic log cabin on an abandoned farmstead, chasing his childhood dream of “living off the land” while working part-time at a variety of jobs.
Since 2000, when he won the Hazel Wood National Wild Foods Cooking Contest, Sam has been teaching regularly on edible wild plants, giving workshops across the United States. In 2002 he was inducted into the National Wild Foods Hall of Fame at North Bend State Park in West Virginia. His first book, The Forager’s Harvest, has won a Midwest Book Award, IPPY Book Award, and was a finalist for the USA Book News Best Books 2007 award. It has been a steady Amazon category best-seller and has sold more than 100,000 copies. His second book, Nature's Garden, has received similar acclaim and has sold over 75,000 copies. He currently lives in the woods of northwestern Wisconsin with Melissa, their daughters, Myrica, and Rebekah, and son, Joshua. Along with speaking and writing, he is also a maple syrup producer, wild rice harvester, and owns a small organic orchard.
In addition to wild food foraging, Sam is an all-around naturalist with particular interest in reptiles, amphibians, bird watching, botany, and mammals. His passion for wild food extends to studying the origin of cultivated plants and the socio-economic history of the human diet. Other favorite activities include running, bicycling, archery, fishing, cliff diving, swimming, photography, cooking, growing fruit trees, using scythes and other old hand tools, hunting, and anything with the family.